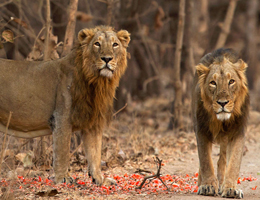 Gir Forest Tour Package is particularly designed and presented to give visitors an incredible, breathtaking and extremely amusing lodging experience athwart the habitation of........... 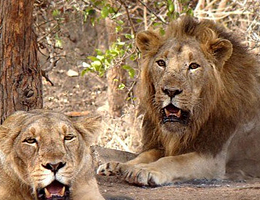 Gir National Park and Wildlife Sanctuary is one of the well-known Forest which flaunts its unique and amazing Flora and Fauna, where people from all over the world come. It is famous ........... 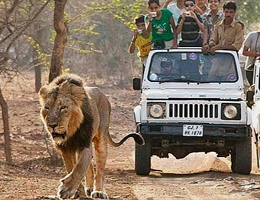 India is a massive nation with the diversity of all shapes and all over. From lofty mountains to desert topography to huge National Parks, there is plenty to see in the country..... 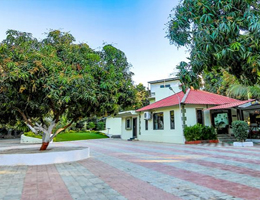 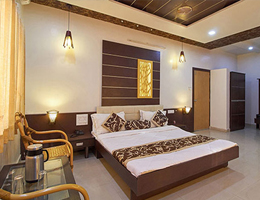 Gir National Park, the only dwelling place of endangered Asiatic lion other than Africa, was established on 18th September 1965 and is spread on 1413 square Kilometres of land in Saurastra region of Gujarat situated on extreme west of India. The main motive of Gir was to protect endangered Asiatic lions, but is now home of thousands of aerial and terrestrial animals. Over 606 varieties of plants, 36 species of mammals, over 2000 genus of Insects and approximately 300 sorts of birds dwell here. It is in today's world of diminishing ecological balance, Gir Forest National Park is ideal instance of balanced ecosystem. The diverse and dense vegetation aids in maintaining the ecological balance which results in moderate climate of the region. Gir has been an important home of thousands of wild lives and also contributing immensely for its survival. Have a glimpse of lions in its natural habitat at Gir and gather memories of endangered species which your next generations may not be able to see.

Based on the census as per April 2010, it has been recorded that count if lions is about 411 and the program of lion breeding covers the surrounding park and has been able to breed about hundred and eighty lions in captivity since the beginning. This wildlife reserve comprises of three reserves that are adjoin and comprises of Nalsarovar Lake that is home to a wide stock of the water birds, Rann-of-Kutch that is renowned for its captivating island of flamingo and Indian wild Ass. Collaboration of the three reserves increases wildlife diversity to the wildlife reserve that summons wildlife enthusiast scores to the place from various parts of globe.

The sanctuary lies in the peninsula of Gujarat that is India's south-western part with terrain that has low hills, is rugged and filled with mixed deciduous trees. Land is rugged with the deepest ravines, rocky hills that are steep, rivers aplenty and those are interspersed with big grassland patches. Major attractions of the place are Asiatic Lions, The bird Sanctuary that houses more than two hundred species of birds, Temple of TulsiShyam and breeding farm of Crocodiles that is nearby Sasan. A combination of crocodiles, Pygmy woodpecker, Chital, Leopard and many more such animals make this place come alive.


1. Sasan Gir National Park Area: 1413 Square Kilometres is situated 65 Km south east of Junagarh District of Gujarat.
2. Acknowledged worldwide as: Home of the Asiatic Lions
3. As per last census held for Lions in 2010: The total population of lions was 411 out of which 162 were females, 152 cubs and 97 are males were estimated.
4. Altitudes: Altitude varying from 150 - 530 meters above mean sea level
5. Longitudes: 700 50' 710 15' East
6. Latitudes: 200 40' 210 50' North
7. Temperature: the average temperature in summer is 450 C and in nights temperature falls 100 C below the temperature of day. Winters are moderately cool and pleasant.
8. Rainfall : the average rainfall is 100 mm in western part of Gir and 650 mm in Eastern region of Gir
9. Best time to visit: November to January as winters is pleasantly cool.
10. Closed Period: 15th June till mid of October as monsoon hits Gir during four months.

How to reach Gir National Park?

The Gir National Park is located at a distance of 65 Kms from Junagarh and 40 Kms from Veraval railway station. Sasan Gir and Ahmedabad are well connected by Road and Rail network. Tourists can easily through 7 hours journey on either private or public means of transportation can cover on road. For tourist seeking for airline services can take the flights to Rajkot and Keshod airport from Mumbai Airport. Tourists from Delhi can opt for flight to Ahmedabad and can proceed on road to reach Gir.

The wealth of flaura and fauna at Gir is debarred from being seen as Gir National Park is kept close from mid of June to 15th October every year due to rainy season. November to March is considered best time to visit Gir Forest National Park. However April and may, despite of being hot months are perfect to witness the amazing wild life of Gir. June is too hot and is advisable for only those who can cope up with harsh loos of this month. Climate is predominantly hot though the area witnesses monsoon, winter and summers yet summer accounts for the maximum time.
Summer: It is during this time that the range of temperature fluctuates between forty five degrees Celsius and ten degrees Celsius. Hottest months have been recorded to be between May and April and that is not the Gir Forest best time to visit.
Monsoon: However, rains do bring in relief from this scorching heat during period of monsoons that continues up till September from June's middle that can be the Gir National Park best time to visit if you have always wanted to visit the place. The forest is open throughout the year, excepting the months of monsoon that extends till October from June.
Winter: Winter is in fact a great time when the trip can be planned to the National Park because Best time to visit Gir Forest National Park. If at all there is any best time then it has to be the winter months because the weather has a cool quotient and you have an amazing chance to witness game sightings.

Since 1884, the year, This Park has been the only habitat naturally for the Asiatic lions that are now endangered. During the era of the British, these British officers always took real pride in mercilessly hunting the lions and also hunting in general. All their hunting activities were done with the help of locals and Maharajas as well as the nawabs that are obliged them. Pride and prowess of Maharajas during this time was fathomed on the basis of total tigers and lions that were hunted successfully. It is in the year 1899 that great famine happened and population of the lions significantly dropped and it was Lord Curzon that dropped the idea of planning any hunting expedition or "shikaar". Furthermore, it was advised that local Maharajas and Nawabs safeguard meagre left over lions. In the year of 1960, Indian Government banned hunting of lions and the only thing allowed was photo safaris that continue up till now.

The National Park of Gir's topography comprises of diverse flora range and there can be a varied range of deciduous trees, semi-evergreen and evergreen trees that can be found. In addition to that there are grasslands that are savannah type, jungles with thorny scrub, open zones of mixed forest and a lot more that can be found. However deciduous and mixed forested belt occupies major portion related to the park that consists of teak trees mainly. The broad leaved evergreen trees that are found at the Park include Flame of forest, Zizyphas, dhak, jamun, tendu, babool, banyan and acacia. Plants like Dhavdo, timru, umro, simai, Simal, khakro, Kalam, Vad, Amla, Bamboo, Ber and Saliacan also be found inside the forest. The trees that are deciduous are actually dry type while evergreen trees appear shady, moisture retaining and broad-leaved. Trees like casuarinas and Prosopsis are planted on forest department's coastal side. There are flowering trees as well.

Gir is known to be blessed with a wealth of more than two thousand three hundred species of fauns and it is diverse. According to the statistics, It conserves almost three hundred species of leopard and lion. However, the one thing that makes Gir really renowned is the fact that Asiatic lions are reserved in it. Only place after Africa that is second to Gir is Africa in terms of Asiatic lions. Apart from leopards and lions, the National park boasts of two thousand species of insects, thirty eight species of mammals, thirty seven species of reptile, three hundred species of bird, leopards and lions. Birds comprise of greenish warbler, green pigeon that is yellow footed, Griffon Eurasian vulture, Hawk eagle that is changeable, Bonelli’s eagle, Indian Pitta, bush rock quail, Bonelli's Eagle, Oriole, crested, treeswift and pygmy woodpecker. Mammals like Porcupine and hare can be spotted with carnivores like jungle cats, striped hyenas, Indian leopards, Indian mongoose and Golden jackals.

1. Sasan Gir National Park:
If there is any wildlife destination in the world that is eminent then that has to be Sasan National Park of Gir. It is located in the Junagarh district of Gujarat and is considered the biggest sanctuary and wildlife reserve of India. The Park's main attraction is the Asiatic lions that are called Leo PantheraPersica also. Over the years it has gained immense level of popularity as one prestigious sanctuary for lions spanning across 3386 square kilometres.

2. Devalia Safari Park:
It is called the interpretation zone of Gir and in other terms, Devalia is part of National Park of Gir that is segregated by Chain liked 412 Ha fences. For reducing the pressure of Gir because every year it attracts the heaviest footfall, Devalia caters to those tourists that are unable in getting permits for safari in Gir.

3. Crocodile Breeding farm:
The centre of crocodile breeding in Sasan Gir has been always a very unique place where baby to adult crocks are found. They are bred here so that they could be restocked in the sanctuary. It is a place that is quite appealing because forest department stated the conservation project for crocodiles and released to almost thousand marsh crocodiles into Kamaleshwar Lake.

4. KamleshwarDham:
This is considered the most requisite area of a dam that has been built over the river of Hiran. It is located inside Nation Park of Gir's vicinity and the dam serves as lifeline for the area of reserve whereby tourists are able to find broad types of the marsh crocodiles.

5. Tulsishyam temple/kankaimatateple:
This is considered to be one of the most famous temples within the area and is dedicated to Krishna , The Lord. People whenever paying visit to the sanctuary make it a point that surely visit this temple whereby crucial hot springs are found near temple and it is considered as one attractive location.

6. Zamzir waterfall:
This waterfall is a lovely one being present on Hiran river and is quite a beautiful place having an active waterfall all round the year. Every year people flock around this waterfall mainly because few steps towards waterfall's upstream, you can take a bath. It is all about enjoying the nature and beauty this place has to offer.

The worldwide famous forest reserve has plenty of options for stay.  It has from budget lodge to star category hotels and resorts for tourist with distinct paying capacity. There are ample of options for laid-back stay in Gir Forest Reserve. You may also opt for lodge operated by forest department, the Gir lodge and the SinhSadan Forest Lodge along with privately owned hotels and resorts situated in the environs or vicinity of National Park.

The rates do come down to literally half the amount when there is low season but it is always advisable that one cross checks before they go ahead with booking. This park is visited well round the year therefore you might short supply for the accommodation hence it is advisable that booking is done way before, in advance, particularly during winter months. There are safari camps that are actually luxury camps and it is located on a mango orchard overlooking Hiran River.